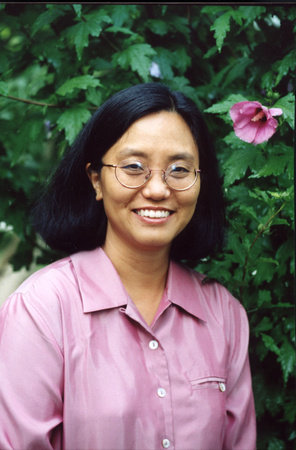 Linda Sue Park was born and raised in Illinois. The daughter of Korean immigrants, she has been writing poems and stories since she was four years old. Park was first published when she was nine years old—she was paid one dollar for a haiku that ran in a children’s magazine.   During elementary and high school, Park had several more poems published in magazines for children and young people. She studied English at Stanford University and then she took a job as a public-relations writer for a major oil company. This was not exactly the kind of writing she wanted to do, but it did teach her to present her work professionally and that an interested writer can make any subject fascinating. Somewhere between living in Ireland, England, and the United States; teaching English as a second language and working as a food journalist; and starting a family; Park finally realized that what she really wanted to do was to write books for children. Park lives in upstate New York with her husband, their two children, a dog, a hamster, and eight tadpoles.  For more information on Linda Sue Park, visit her at www.lindasuepark.com
Random House Children's Books